Once upon a time - Selket Arabians

I have never posted about him on any forum - so I don't know what you are talking about "Sparky". I'll tell it like it is because I am not playing games -I know something you don't know etc. These horses have been starved and neglected for the last several years - They were originally bred and owned by the Selket Farm owner Jim Andresen -who passed away several years ago and left them to this guy. It has irritated me to watch him write the things he has about loving his horses knowing the condition that they were in and how they were kept. I know that it was reported to animal control in Michigan- but apparently not enough, if anything was ever done. Now they are in another state-I was told one horse died on the transport. Finally maybe something will bring justice to these poor animals. I hate seeing any animal abused in anyway, so this whole situation really upsets me.

A horse dying during transport is not evidence of abuse or neglect, absent additional details. And I'm not seeing any others facts posted here to conclude he starved or neglected them. All I've seen posted is he has been charged and your opinion that he has starved them.

Marezee,  I accept that you are telling the truth about not posting on another forum.  I was quite sure the photo was the same person, along with the writing style, so it is my mistake and I apologize.

The rest of my comment stands.  I too am upset when any horses are abused but I have been on forums long enough to realize that emotions can run rampant and good people can be trashed.  I have been guilty also and do not want to continue the pattern.  I also know that most people posting on forums are not who they are, but who they would like to be.  That's fine with me. (God sees us as the perfect people we will be someday or he couldn't listen to our prayers. lol).  Ron Hevener has been a good spokesperson for the Arabian horse breed.  I am willing to wait this out before passing judgement.  You say the horses have been abused for years.  When complaints are made, animal control MUST respond.  Apparently, the horses were not as the complainers thought.  So, where is the justice?  The horses were not removed from this man last month but they were this month.  That tells me either someone in charge made a mistake or they felt the horses, while not in dire circumstances at that moment,  would receive better care after that first visit but were concerned enough to recheck them a few weeks later.  Were the horses in the same condition or worse on the return visit?  I don't know the answer and unfortunately I do not trust animal control to be immune to hearsay of an ill informed public outcry.

I understand that people need proof and just me saying something doesn't mean it is so - That said, I do know that I am speaking the truth about this sad situation. The man was given many chances to make things right, not only by animal control, but by private citizens and groups offering him aid. He was asked to sell horses (mostly to try and rescue what could be rescued) and he put prices on them in the thousands of dollars (multiple thousands) - for horses in such poor condition they were literally skin and bones. He refused to back down on price. He may have been a good spokesperson on the internet but to me actions speak louder than words. I am glad to see that S Carolina is doing what Michigan never did, follow up on this and make him answer for his actions. I findit quite interesting to read what others with personal experience with him are commenting on the article that I originally linked to this topic. I only hope this won't turn into a case where he gets the horses back again and again, as has happened in other animal abuse cases I've seen. Look at the pictures in the article. They don't get that poor in a month and There is NO excuse for that.

I am sorry for the horses as they are the ones who paid the price here due to neglect whatever the situation. The person is not of consequence to me - it is the horses who need help and require aid. I am glad ARM is stepping in. There are so many farms with large numbers of horses who refuse to sell the horses at reasonable prices thus collecting them and letting their living conditions and body scores deteriorate. I've personally seen it with my own eyes. Very sad when there is nothing you can do. Animal control will not do anything until they hit a certain point. There is a difference in a horse with legitimate health issues and an entire herd turning up skinny and simply not being fed.

I know he has had some pretty significant health issues.  Or so I have read elsewhere.  Perhaps that provides some explanation.

There is NO excuse for this, none.

I hope the horses are getting the care and feed they deserve. 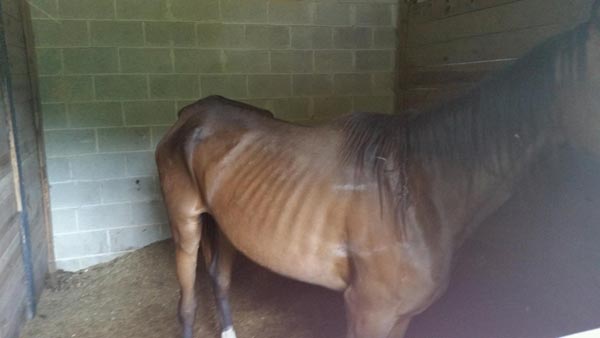 My gelding was pretty skinny when I got him. He had belonged to a woman who cared and knew a lot, but had to move to another county next to the one he was in. Couldn't feed grain everyday, only maybe a couple of times a week, when she would come over. The horses had full pasture and round bales of hay available. He was the only one that got so skinny, the others were ok. He was probably a body score of 2-3 when I got him. The owner had only been dealing with this living situation for maybe 2 months, and he had lost weight quickly. She was happy when I offered my pasture, and to feed him daily. He picked up weight quickly, and has been fine since. Each story is unique. So sorry to see these photos, and if horses are up in stalls, how can they feed themselves?

Do you remember the case against Marsha Parkinson?

There is NO excuse for this, none.

No excuse for what?  Do you know if he was paying someone else to care for the horses due to his illness?  What specifically do you know about the facts in this case.  So far, the only facts I've read are that he has been charged.  Please enlighten me - I would like to hear the facts.

Skin Designed By Evanescence at IBSkin.com